Care and Management of Poultry Birds

Disadvantages of Asexual Reproduction in Plants

How to Grow and Manage Cotton (Gossypium spp.) Farm

Cotton is the most important of the plant fibres and its production is greater than that of all other fibres out together.

There are two main species in cultivation, namely, Gossypium hirsutum L. (upland cotton) and G. barbadense L. of the hirsutum cultivars and about 15% by Gossypium barbadense cultivars.

India has the largest area under cotton followed by China.

Origin of the species of Gossypium has been a subject of considerable controversy.

There are probably centres of origin of the cotton plant: Indo-China and tropical Africa in the old world, and central and south America in the new world.

Some authorities claim that the two cultivated species are central and south America origin. 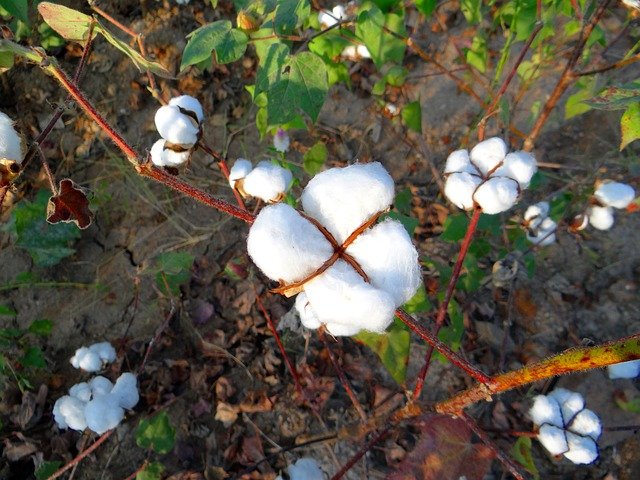 Cotton production extends from 37°N to 32°S. It is a sun-loving plant and can not tolerate shade, particularly at the seedling stage.

Also,  it requires low light intensity, due to prolonged overcast weather, shading from inter cropping or too dense a stand of cotton can retard flowering and fruiting and increase boll shedding.

More so,  It does not tolerate very heavy rainfall.

Cotton can be grown in a variety of soils from light sandy soils to heavy soils. The major production areas in Nigeria are Kaduna, Sokoto, Kano, Plateau, Bauchi, Borno and Gongola states.

The cotton plant is a small shrub which grows to a height of 1-2 metres. The plant is a perennial but is normally cultivated as annual.

It has a tap root system, which penetrates deep into the soil for several metres and the stem becomes  woody when mature.

Leaves occur spirally on the stem. Each leaf consists of a long petiole and a palmate lamina which is divided into 3-5 lobes.

Hairs and oil glands are present on the leaf.

The flowers are borne in specialized branches which occur on the upper part of the plant.

The stigma is receptive when the flower opens and pollen is shed at the same time so majority of the flowers are self-pollinated.

The flowers are visited by insects and some degree of cross-pollinated occurs, normally ranging from 5-25%.

The fruits are spherical or ovoid leathery capsules, called bolls, 4-6cm long. The bolls of the two commonly grown species can be distinguished from each other.

Bolls of G. hirsutum are light green in color, smooth and possess few oil glands whilst the bolls of G. barbadense are dark green and prominently pitted with many oil glands.

Bolls grow to full size in about 25days after opening of the flowers and seeds develop for a further 25 days before the boll opens, although cultivars and environmental differences occur.

The seeds are dark in color. The cultivated cottons have two types of unicellular hairs which are out-growths from the epidermis of the seed:

A. Fuzz, in which the hairs are circular in cross section. At first, thin walled but cellulose is then deposited within the hair until the central cavity or lumen is almost obliterated.

These hairs are attached firmly to the seed and cannot be spun.

B. Lint, in which the hairs grow to a greater length and the deposition of cellulose is reduced, giving a lumen or cavity so that the hairs collapse on drying to form a ribbon.

This lint is easily detached from the seed.

Varieties of the plant

Recommended varieties include ‘Samaru 71’ for the northern states of Nigeria and ‘Allen 26J’ for Edo north.

The commercial cotton is always grown from seed. Seeds are planted at 4-6 per hole depending on seed quality, and thinned to 25cm apart on 90cm or 75cm ridges.

Most of the cotton is planted after mid-july but the best yields are obtained from the crop planted in mid-june.

Weeds can be controlled manually or with herbicides; e.g 9.8kg ai/ha of diuron + 0.8kg ai/ha of norflurazone applied pre-emergence.

Fertilizer needs of the crop can be met by applying recommended rates of 50kg N, 25kg P2O5 and 20kg K2O/ha.

Apply N at sowing or shortly after germination by burying in 5cm deep grooves, 8cm away from the line of seeds or plants.

P and K fertilizers should be broadcast and incorporated in the soil just before planting.

Harvesting begins about 6 months after planting.

Cotton is picked when dry from fully opened bolls and picking should be done regularly so that open cotton is not left in the field which might result in deterioration in color and quantity of the lint.

Much of the world’s cotton is picked by hand and 3-4 pickings are usually made. Cotton is picked from the plant is called seed cotton, which is composed of seed, lint and fuzz.

In advanced agriculture, harvesting is done with machines.

With improved management, yields of up to 2000kg/ha may be obtained.

Processing of the Cotton

Seed cotton from the field is first dried. It is then put into a machine which separates the lint from the seed and fuzz.

This type of machine is called a GIN. The lint derived after ginning is then compressed and packed into bales of about 180kg each.

The seed, which is left after ginning still has the fuzz attached. This is removed mechanically and the clean seed is further processed to yield cotton seed oil.

1. Cotton lint is used for clothing, household and industrial products.

Perhaps the outstanding quality of cotton is its light tensile strength, that is, the ability to withstand tearing or breaking when it is under stress.

Unlike other fibres, the tensile strength is appreciably increased when it is wet.

2. Cotton seed oil derived from the seeds is one of the most important of the world’s non-drying oils.

Refined cotton seed oil is used mainly for edible purposes : for cooking, salad, manufacture of margarines, and to a lesser extent in the packing of fish and cured meat.

3. Cotton-seed cake, obtained after extraction of oil contains 21% protein and is used for livestock feed.

Cotton seed hulls are used as roughage for livestock and as livestock bedding, fertilizer, fuel and to make paper.

Major diseases of the cotton are bacterial blight, Fusarium wilt and leaf curl.

This is caused by Xanthosoma malvacearum. It attacks all parts of the shoot, resulting in spotting and death of infected parts.

Control measures include planting only disease-free seeds, treating seeds with sulphuric acid or cuprous oxide before planting and crop rotation.

This is caused by Fusarium oxysporum and causes death or stunting of the plant.

Sowing resistant cultivars is advisable in other to prevent this disease.

This is a viral disease, which is transmitted by the white fly Bemisia tabaci which makes all parts of the plant to be distorted.

It is controlled by strict plant sanitation and a closed season or by the use of resistant cultivars.

It attacks the strains on the lint. The quality of such lint is drastically reduced. It also sucks sap from the boll and in the process transmits bacterial and fungal diseases.

If insects are not many, handpicking of the insects may suffice. In severe attacks, insecticides like vetox 85 or didigam may be applied.

2. Bollworms (Heliothis armigers, Earias spp.) are a group of moths whose larvae cause much damage to the cotton boll.

The eggs are laid on the shoots and the larvae that emerge, burrow into the bolls and flower buds, causing extensive damage.

Infected bolls fall off before they mature.

Control is by the enforcement of a close season between the end of harvest and the planting of a new crop. During such periods, all residues from a previous cotton crop should be pulled up and destroyed or burnt.