Also, if you’re buying pig feed from a store, formulating your feed with grains and supplements, cereals with amino acid sources, or grains and vitamins and minerals, protein foods are important for all classes of pigs.

There are two categories of protein sources for pig feed formulation – the plant sources, which are mainly the legumes, and the animal sources.

You can read more about the plant sources of crude protein for pigs here while we’ll talk about the animal sources of high protein today. 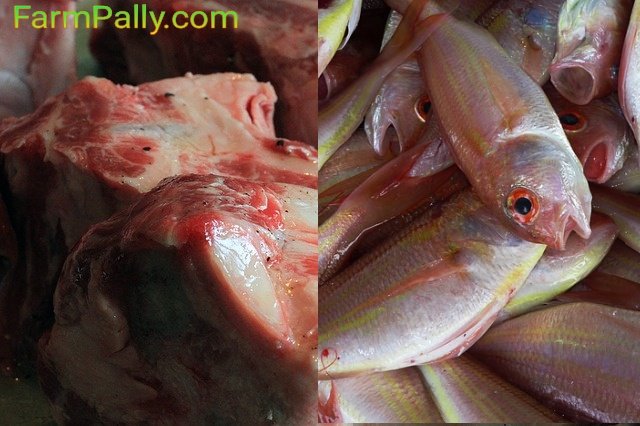 Fish meal is relatively high in lysine and other essential amino acids, and it’s essential in fast-growing pig feeds.

It is among the best protein feeds available. Even some reputable brands of pig feeds have products that contain crude protein of about 65% or above.

Its use in pig feeding by small-scale swine farmers may be limited due to the high cost associated, but you can still formulate yours locally with fish waste from factories.

A level of up to 5% could be practiced as higher levels may increase production costs.

Locally produced fishmeal is good to be used, but the crude protein is usually lower and supply may not be guaranteed.

Contamination with sand arising from sun-drying may also constitute problems in use as this may have negative effects on digestive organs.

Blood meals, although not commonly used in pig feed like fish meal, it’s also good as a protein source for swine.

Blood meal preparation can be a little technical and the supplies may be limited, probably these are the reasons it’s not usually used.

Blood meals can be prepared as a drink or dry meal, and it’s good for pigs.

As a drink, an equal volume of boiling water will be added to the blood in a bowl and boiled together again.

Like dry food, the blood will be heated and should be stirred constantly so it does not get burnt.

When the moisture is reduced to 10%, it is then taken to a cool, dry place.

Depending on how you wish to finish the drying, it could be drum drying, solar drying, oven drying, spray drying, or flash drying.

For a local farmer, you can spread the blood on a neat, hard surface and sun-dried.

The crude protein could be as high as 80%. It is also rich in lysine, threonine, and sulfur amino acids and is known to be deficient in legumes due to the processing procedures that are used.

Isoleucine is however deficient while bacteria growth due to poor processing and preservation could constitute another major problem.

The level of feeding should not be higher than 2% in pig starter diets and a maximum of 5% in lactating, grower, and gestating pigs diets.

The rations for fatteners may contain between 10-15% levels of inclusion.

In a region where bovine tuberculosis is endemic, blood should be well cooked.

This practice may also prevent the transmission of other diseases such as anthrax.

Controlled cooking should, however, be practiced to prevent damage to the protein and retain its biological value.

Meat and Bone Meal are dried end-products of rendering and they have high protein value.

Specifically, they have a protein of between 40 to 50% depending on the processing method used.

They contain gelatin which is deficient in tryptophan and is therefore low in biological value.

The calcium and phosphorus content could be very high as the ash is up to 47%.

They are processed for animal feeding by boiling for about 30 minutes, then removed from the shell, dry, and then grind.

Also, its use in pig feeding has been reported to be satisfactory.

Pigs are mostly raised for food, therefore, fattening up pigs is one of the things swine farmers would want to do.

One of the food ingredients to feed your pigs to gain weight is skim milk. It can enhance the average daily gain per day and improve weight in a short timeframe.

It improves palatability and digestibility of feeds and is most useful for baby pig starter rations, it can also help the underweight mini pigs to grow better.

However, skim milk uses in animal feeding generally is still low because of its high use as food for man.

The potential use of these products for animal feeding will, however, depend primarily on how they compete both nutritionally and economically with conventional feeds, the high protein concentrates such as fish meal and soya bean.