The two main ingredients of organic pig feed are Carbs and Protein. They are essential in making the pigs gain weight and grow muscles.

Energy sources normally form the major part of their diet, just like humans, and are therefore required in larger quantities.

It will consequently exert greater influence on the overall cost of the ration.

Most of these sources contain some minerals and vitamins, and the remaining requirements need to be met by commercial mineral/vitamin supplements.

We’ve discussed protein sources that are healthy for pigs the other time, and today, we’re going to be talking about carb food sources for pigs. 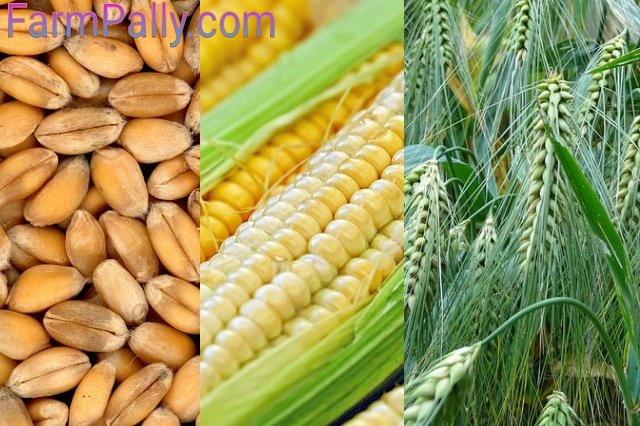 These are high-energy-yielding feed materials with high digestibility. Some of the popular cereal grains are wheat (Triticale and rye which are hybrids), oats, barley, corn, etc.

These are the kinds of grains that pigs eat to get energy for their daily activities, they’re very much important in pig feed formulation.

They normally consist of the highest proportion of the ingredients used in compounding rations.

Cereal starch does not need special processing treatments apart from heat to make them fit for consumption.

Compared to legumes, cereals can be said to be poor sources of protein (around 10%), which is deficient in some essential amino acids such as lysine, methionine, and tryptophan.

Cereals are also generally poor sources of calcium and phosphorus because of the imbalance in the calcium: phosphorus ratio.

Vitamins have been reported to be low, except in yellow maize which contains carotene.

Pigs utilize the maize crop in the form of grain. It may be used in the ration as the only source of dietary energy or in combination with processed roots and tubers such as cassava without any adverse effect on the health of the animals.

While feeding whole corn to hogs is not bad, you should at least add soybean meal to your homemade feed recipe.

If you’re giving a whole grain to swine, you can get a mix of some of the best grains to feed pigs such as barley, corn, and triticale.

Cracked corn is also manageable provided it’s not contaminated, however, for maize to be effectively utilized, the diets must be supplemented with protein that is high in lysine and tryptophan.

Mineral sources containing phosphorus and calcium as well as vitamins should also be added to the feed.

Sorghum has not been widely used in pig feeding as much as maize.

The energy value is similar to maize, with a crude protein of about 11%, which is higher than maize.

Sorghum digestibility in pigs is higher than in maize. Amino acid content seems to be more critical in sorghum.

Sorghum although small in size should be crushed or rolled before feeding so that many will be chewed by pigs.

Like maize, sorghum can be used to supply all the dietary energy requirements in pig rations and there is no limit on the quantity used provided the ration is balanced.

They do not contain carotene and sorghum-based diets must be supplemented with amino acids, calcium, and vitamins.

Rice is in high demand as food for man and as such its use in feeding animals is limited.

Pigs can eat both raw and cooked rice, and almost all species of rice are good for swine.

Feeding pigs with rice and using it in the animal feed can be in three to four forms, cargo rice, broken, paddy, and the rice bran as feed.

Cargo rice is excellent in feeding pigs and results from experimental trials have proved that it is as good as maize.

Broken Rice has also been used in animal feeding, although it is widely consumed by humans.

Crude protein, oil, and B group of vitamins are usually low due to the removal of the aleurone layer during polishing.

Paddy rice is not considered adequate for pig feeding since the associated husk could be too high in both fiber and silica.

Having said that, rice bran only can be added to pig feed in a small quantity of 1.5kg daily, preferably the ground bran.

The rice bran powder can also be stabilized by lowering the ph from 6+ to about 4 to make it better for swine.

These are obtained from the processing of cereal food materials. The following are good examples

The inclusion of cereal by-products in pig feeds is usually low compared with their parent materials due mainly to their high crude fiber and low energy content.