Our focus today will be on physical weathering, the processes involved, agents, and examples.

What is Physical weathering?

The best definition of mechanical weathering could also be the cracking of rock due to the freezing and thawing of water, that’s the best example of physical weathering.

However, one of the importance of physical weathering is that it aids in enlarging or widening the area of weathering as a result of an increase in the surface area of the rock.

This larger surface area increases the ability or the capacity of chemical weathering. 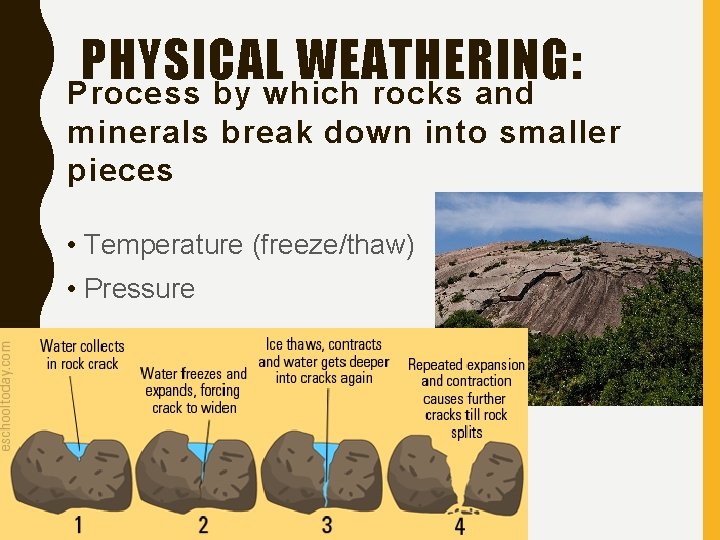 Causes of Physical or Mechanical weathering

Rocks usually are formed below the earth’s crust or at certain depths within the earth’s crust which then means they are within a region of high pressure and removal of overlying materials through mainly erosion process, leading to a reduction in the pressure, thus, creating expansion within the rocks.

The result of this expansion is that cracks and rupture occur wither along joint or lines of weakness and thereby leading to disintegration which is referred to as exfoliation.

The confinement of water within the rocks may result in freezing as a result of the coolness of the atmosphere.

This may result in an expansion that generates very large stresses within the rock.

The volume of water that may be in the rock might increase and now have a greater force to cause literally split, this could be 40 times greater.

Foreign crystals, for example, ice and other salts for example gypsum and rainwater can cause this stress to occur.

On very hot days, rocks would expand because of solar heating or earth warming and then contracts as the temperature cools down.

This alternate heating and cooling as a result of increase and decrease in temperature results in cracks due to the stress the rock undergoes.

These processes are very variable owing to animals being variable and they have their ways of affecting rocks.

A plant can sometimes be found growing on existing rocks whether in cracks or within the crevices.

Other smaller plants for example mosses, lichens, algae, etc. are also capable of growing on rocks a sometimes secrete some organic acids which then act on the rock causing weakness.

Plants also can cause expansion on rocks by the proliferation of the roots within the crevices of the rocks,

The growth and enlargement will further weaken or crack the tricks – animals in turn are variable.

These animals for example rabbits (rodents in general) can burrow into the rocks.

The ways created by them can be used by other bigger animals, thereby increasing the weakness and resistance of rocks.

The amphibians can also cause weaknesses on rocks by habiting the hollows created by rodents.

Ants, termites by their burrowing nature can leave tiny holes on rocks which can then be used by either larger animals – a man by his manipulation can affect the breakdown of rocks through the following