Most farmers breed their gilts at about the age of eight months during which they are not expected to be less than 80kg.

Breeding of pigs at 60kg weight has been considered adequate.

Sows in good condition after weaning of its piglets at between 6-8weeks will come to heat by the following week during which it may be served.

Some farmers sometimes allow mating in the second heat period which is also recommended for sows in poor condition after mating.

Boars, if well grown may first be used for breeding at eight months. It is, however, better to allow them to attain the age of twelve months before being used while they are considered mature at fifteen months.

Usually, there is early re-commencement of the oestrus cycle when boars are kept close to the females leading to the belief that boar odor stimulates sexual activity in females.

Some farmers have resulted in the use of exogenous hormones such as prostaglandins and gonadotrophins to stimulate or properly reproductive activities in pigs.

Where such practice is done, qualified veterinary surgeons should be consulted. 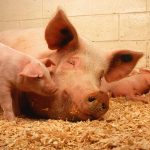 Pigs are known to be polyestrous with the females coming into heat every 24 days on average throughout the year.

The heat period in gilts is shorter (2 days) than that of the sows (3 days).

Heat period is characterized by grunting, restlessness, and swelling of the vulva, which has watery discharge.

The maximum fertility period is achieved in the middle of oestrus, close to the ovulation period.

In order to achieve maximum fertilization, it is advisable to mate twice during the oestrus period.

Mating can be allowed during the first day and repeated after 12-24 hours.

Mating can be as long as between ten to twenty minutes.

It is not advisable to mate every day as this can lead to poor fertility and fatigue.

Artificial insemination may be practiced in farms with facilities.

In doing this sperm could be collected by the farmer from a boar from another farm or even within his farm.

Dilution of the sperm is done after which doses are introduced into the vulva of the females.

Pig gestation is the period following successful mating which takes an average of 114 days (112 to 120 days) or sometimes referred to like 3 months, 3 weeks and 3 days.

Mating is said to be successful if the female does not come back to ‘heat’ three weeks after mating.

Unlike other animals such as sheep and goats, ‘flushing’ is not necessary for pigs.

Excessive feeding before mating has been observed to reduce the chances of successful mating as higher energy intake decreases conception rate.

Weight gain is observed in sows during pregnancy consisting of two thirds from bodyweight gain and fattening of the sow and one-third from embryos development.

Pregnant pigs are usually calm and they should be reared in groups up to a maximum of ten.

Individuals that are nervous or violent to allow the pigs some forms of exercise where possible.

Adequate feeding should be practiced and food conversion into bodyweight and retention of nutrients is very high.

Pregnancy abortion may constitute a problem. This could be caused by the effect of diseases such as swine fever and salmonellosis.

Bad feed such, as moldy food and deficiencies of vitamin A and calcium have been known to cause repeated abortion.

Vices among the pigs such as fight also could be responsible for abortion.

Signs of parturition in sows is characterized by swelling and widening of the vulva and enlargement of the udder.

These are followed by restlessness a few hours before parturition.

Birth appears to be more common at the end of the afternoon or at night, which could take several hours (from two to eight hours).

It is influenced by circadian rhythms while the sow lies on its side.

Until all the piglets are born the sow does not give them attention.

It turns over most of the time in between births and this is when the piglets could sometimes get crushed.

This could be reduced when farrowing crates are used.

The placenta, which weighs between three to four kg may be eaten if not quickly removed.

Piglets are born with their umbilical cord attached which disturbs their movement.

After each birth, it may be necessary to cut it while a drop of iodine or methylated spirit is applied to the surface.

However, if no cut is made, the umbilical cord will dry and fall off within some minutes or hours.

Soon after birth, the piglets move towards the sow in order to get warm and suckle the breasts.

This may cause crushing which can be prevented especially at night by the provision of heaters from electric bulbs.