It is free-floating and is found commonly on water ponds, ditches, and slow-running streams where it forms slimy bright-green tangled masses called colonies. These are easily visible to the naked eye.

Each spirogyra plant is an unbranched filament consisting of a single row of cylindrical cells joined end to end.

All the cells in the filament are identical.

Each cell has a thick cell wall made up of cellulose and is enclosed within a gelatinous sheath which makes it slimy.

A layer of cytoplasm lines the inner surface of the cell wall.

A single nucleus is suspended in the center of each cell by means of cytoplasmic strands connected to the lining of the cytoplasm.

Embedded in the cytoplasm of each cell is a pair of chloroplasts in the form of spiral bands.

Different species of spirogyra may have varying numbers of chloroplasts ranging from one to several per cell.

The spiral nature of the chloroplasts is a rise to its name. The margin of each chloroplast is away.

Each chloroplast contains many protein-like bodies, the pyrenoids, which occur along its length. 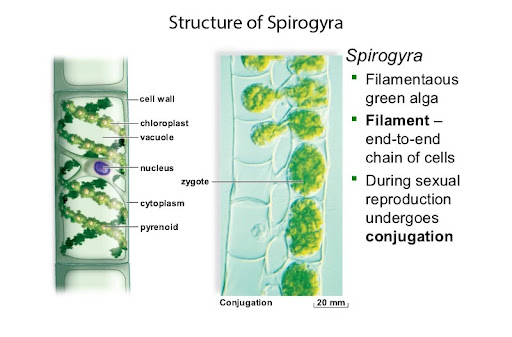 Spirogyra is able to manufacture its own food with the help of spiral chloroplasts.

When it is exposed to light, minute starch grains are seen to accumulate around the pyrenoids, showing that the latter is in some way connected with starch formation.

Although it is multicellular, each filament of spirogyra shows no differentiation into base and apex, and there is no specialization of any cell for a particular function.

Each cell is capable of carrying out its own life processes such as nutrition, respiration, reproduction, and growth.

in other words, although each cell in a filament is physically attached to other cells, it is physiologically independent.

However, unlike Chlamydomonas and Euglena, the cells of spirogyra are not mobile.

Spirogyra reproduces both asexually and sexually.

Asexual reproduction occurs when the filament breaks up into a number of pieces consisting of several cells.

The nucleus of each cell divides into two, and this is followed by the formation of a cross-wall which divides the cell into two small daughter cells.

These daughter cells remain attached to each other and grow in length.

In this way, new filaments are formed and increased in length. thus a type of reproduction is also known as vegetative reproduction.

Sexual reproduction takes place only under certain conditions and is also known as conjugation.

It begins when two or three filaments come to lie side by side such that the cells of one filament lie adjacent to those of the other.

When two filaments lie side by side, a lot of mucilage is secreted and this causes the filaments to adhere.

Although all the filaments are morphologically alike, one filament of each pair is regarded as the male filament while the other is the female filament.

This distinction is based on the different behavior displayed by each filament during conjugation.

The adjacent cells in each pair of filaments put out lateral outgrowths which make contact with each other.

As the outgrowths lengthen, the filaments are pushed apart.

At the point of contact of the outgrowths, the cell walls break down with the result that a narrow continuous tube leading from one cell to the other is formed.

This tube is called a conjugation tube. Meanwhile, the cytoplasm of each cell shrinks away from the cell and forms an ovoid mass in which the detailed structure of the chloroplasts disappears.

This ovoid mass is known as a gamete.

The former is active while the latter is passive.

The male gamete of one cell then passes into the adjoining cell through the conjugation tube.

Once this has happened, the two gametes meet and fuse: their nuclei and cytoplasm unite and the resulting structures become surrounded by a thick resistant wall, thus forming a zygospore.

The zygospores sink to the bottom of the pond when the cell walls of the parent filaments break.

After a period of rest, the zygospores germinate when conditions are favorable.

The wall of each zygospore ruptures and a green cell emerges.

This soon divides transversely to form a filament consisting of a chain of cells.

A single filament can give rise to a colony by vegetative reproduction.