Tobacco Plant Cultivation and the Uses of its Leaves

The stimulating and slightly narcotic effects produced when the dried, cured and fermented leaves of the tobacco plant are smoked, sniffed or chewed have led to an almost universal use of tobacco. 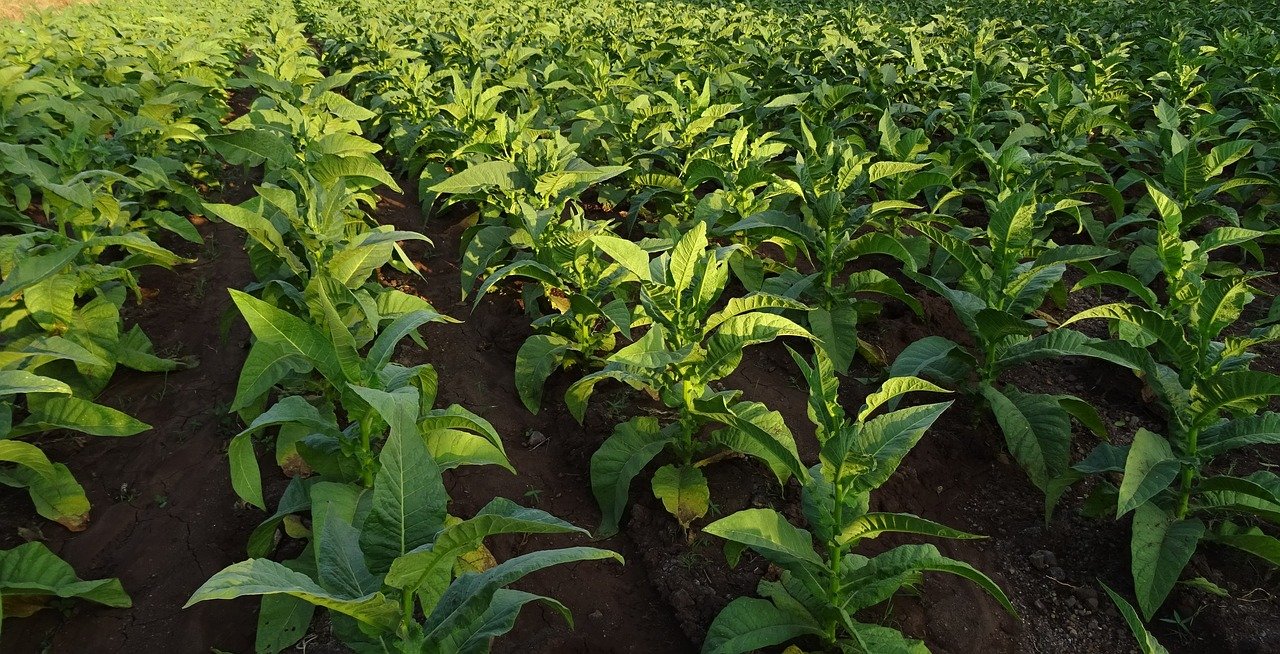 There are two species of the genus in cultivation, Nicotiana tobacum L. being by far the most important and supplying most of the world’s tobacco needs.

The other cultivated species is Nicotiana rustica L, which has higher nicotine content in the dried leaves (about 6% compared to 3% in Nicotiana tabacum).

Most of the world production of tobacco is in tropics and subtropics. China and USA are the leading producers.

In Africa, Zimbabwe, Malawi, Tanzania, Kenya and Nigeria are important producers, and Tobacco in grown mainly by tobacco companies in Nigeria.

About 70% of the crop is produced in the northern states, with Sokoto, Kaduna and Kano being major producing States.

Tobacco is a native of tropical America where it was used for chewing or smoking long before it was discovered by Europeans.

Tobacco was in primitive times in the west Indies, central America, Mexico, Columbia, Venezuela and Brazil.

It was taken to Asia and African countries by the Spanish and Portuguese at the beginning of the seventeenth century.

Tobacco is one of the most adaptable of tropical crops. It requires rainfall of 2000mm or more but adequate sunshine when the leaves are maturing.

The optimum temperatures for growth range from 25-30°C.

It does not tolerate waterlogging and strongly acid or alkaline soils.

The Botany of the plant

It is a short-lived perennial which is grown as an annual.

When young, the plant has a rosette-like growth habit but later produces a stout, erect main axis about 1.5m tall.

The stem is unbranched except when topped, when axillary buds grow out to produce branches.

The leaves vary greatly in size, thickness, texture and in the prominence of their veins, depending on the cultivars.

They are sessile and number per plant varies from 20-30. The number is fairly constant for each cultivar.

The narcotic and stimulating properties of the leaves are due to the presence of small quantities of an alkaloid, nicotine.

Nicotine is most abundant in the leaves but is present in all parts of the plant except the seeds.

The inflorescence is terminal on the stalk and multi-flowered.

The anthers dehiscence and the stigma is receptive when the flower opens so that self-pollinating can occur.

Up to 40% cross-pollination does occur. The fruit is a two-valved ovoid capsule with very many seeds which are light to dark brown.

The small size of the seeds requires that they’re down in seed-beds.

Germination follows after 5-7 days and shading is gradually reduced so that the young plants harden off.

The seedlings are now transplanted to the main site after 40-60 days.

Spacing between the seeds depends on the cultivars. Small leaved orient tobacco is planted at spacing of 10x30cm to 20x50cm and large-leaved, heavy cultivars are at 90x120cm.

Weed control can be done manually about 4-5 times during the growing season.

Leaf quality may be enhanced by topping and de-suckering the plants.

The topping operation is done by removing the flower buds and the top-most leaves.

Topping allows the auxiliary buds to grow. The suckers produced by these buds can also be removed from time to time (de-suckering).

The first mature leaves are ready for harvest in 4-5 months.

The leaves ripen from below upwards and harvesting is done when the leaves have reached the required shade color – light green for cigars, golden green for cigarette tobacco.

That makes it necessary to reap the leaves 4 or 5 times at about weekly intervals whenever they are ripe.

Care should be taken during harvest as injury to the leaves lead to color blemishes during cutting.

All leaves can be harvested in one operation if the uniform color of the leaves does not matter much.

Curing may be described as the process by which harvested tobacco leaf is made ready for the market.

It is essentially a drying process whereby most of the moisture in the harvested leaf is removed to about 10-15.

Depending on the method of harvest and the maturity, there are four principal methods of curing.

Farmers’ yields vary between 400 and 600 kg/ha of cured tobacco leaf.

Heavy cigar tobacco can yield up to 3000kg/ha.

Tobacco has stimulating and slightly narcotic effects due to the presence of 1-3% of the alkaloids, nicotine (C10H14N2) in the processed leaf.

The amount varies with species and cultivars, cultural practices and type of curing used.

Besides nicotine, it contains resins, phenols and pyridine compounds, carbohydrates of about 25-50% of total dry matter of mature leaf.

Tobacco is smoked, sniffed or chewed. It is smoked in the form of cigarettes, cigars and pipe tobacco.

Cigarettes are made mainly from flue-cured tobacco.

Cigars are made from air-cured leaf.

Pipe tobacco is usually made from blended flue-and-air-cured mixtures.

The seeds of tobacco, which contain no nicotine can be processed to tobacco seed oil and used as a substitute for groundnut oil in the oil paint and varnish industries.

The seed cake can also be used as feed for cattle and horses.

Some of the main diseases of tobacco are the following

Insect pests of tobacco include the following but not limited to these.