Ann Baker was reported to have bred the ragdoll cat breed with three unknown heritage cat breeds in California. This breed is often referred to as puppy cats as they follow the owner in every place and love to spend time with kids and owners.

Characteristics/Personality of The Ragdoll

Ragdoll cats are calm and not destructive. You’ll rarely find them damaging your furniture and other materials around the home.
They are also very friendly and loyal like a pet dog. People usually liken their personality to pet dogs since they are affectionate, sociable, intelligent,  and communicate softly and gently with other cats and humans.
Ragdolls are generally happy cats, not aggressive, and don’t usually meow. They like to lie in the lap of the owner, go limp and relaxed when picked up by owners and love to be cuddled, especially when they’re not full-grown.
It usually likes to stay at ground level and may not be hesitant to jump over the fence, although it can jump 5 feet high. Ragdolls, when left outdoors, like chasing squirrels and hunting bugs but they should be limited to a securely fenced area.
This is because ragdoll cats lack outdoor skills and have been known to lack road sense. They will rarely run away from vehicles and may even lie on the road, therefore, they can’t be left alone.
The cat breed comes in varieties of colors such as white which can be mitted, van, bicolor, and colorpoint, another pattern with no white, but seal, blue, chocolate, lilac, red, and cream color. 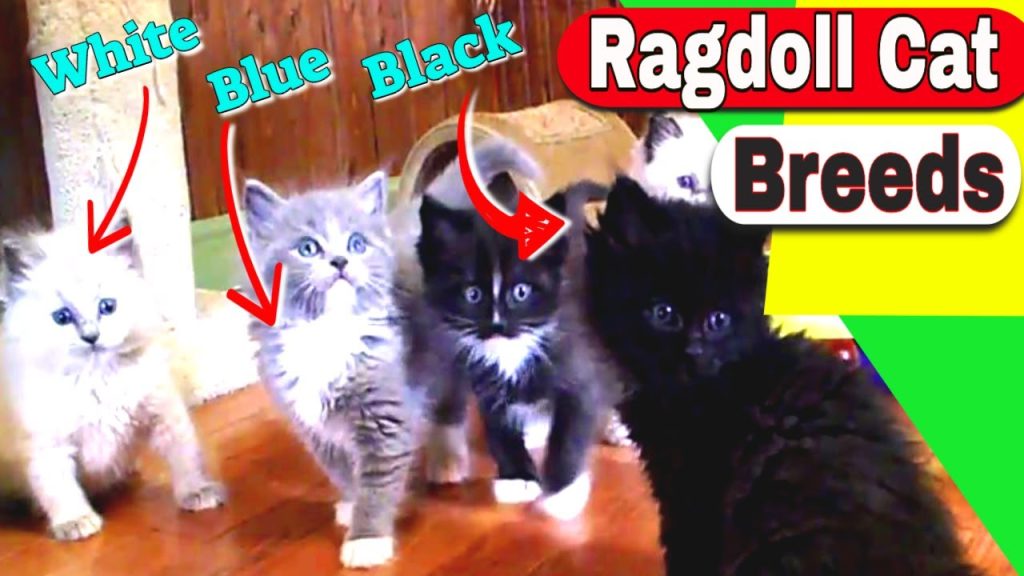 Colorpoint Ragdolls have pointed markings with no white spots on their coat.
Mitted Ragdolls have white feet in the front, a white chin, and belly stripe. They may also have a patch of white on their forehead and nose.
Bi-colors Ragdolls may have white paws. They may have some white fur on their backs and the tails, ears, and the outer part of their masks may have darker markings.
Ragdoll is a semi-longhaired cat with charming blue eyes, and fur that doesn’t shed too much. They are very clean and don’t require a frequent bath, but you should train your ragdoll kitten to take bath so this doesn’t become difficult in her later life.
Talking about their weight, the female ragdoll cat weighs between 10 to 15 pounds, and the male should be around 20 pounds, with both having a life expectancy of at least fifteen years if proper care is given.
Positive reinforcement like praising and reward help Ragdolls to learn tricks and good manners and are considered easy to be trained.
Like many other cat breeds, they don’t like doors to be shut at them and can be furious trying to know what’s behind the door.
The breeding process and breeding cycle of Ragdolls are nothing different from any other cats, but they are not allowed to outcross any other cat breed.

Ragdoll cat’s maintenance is considered medium as they don’t pose problems to the owner in terms of care and health issues. They are healthy unless when they have inherited health problems.
Some of the health problems that may affect a Ragdoll are Hypertrophic cardiomyopathy, obesity, bladder stones, Feline mucopolysaccharidosis, feline infectious peritonitis (FIP), and hairballs. FIP is caused by a type of virus called a coronavirus which attacks the cells of the intestinal wall of domestic cats like Ragdolls.
Hypertrophic cardiomyopathy is a type of heart disease in Ragdoll cats that is passed down and a DNA test is available to identify Ragdoll cats that may carry one of the mutations that cause this heart disease.

How to take Care of Ragdoll?

Ragdolls have moderately long fur with little undercoats. So, it sheds in a very less amount and does not require much grooming.
Owners can comb it once or twice a week to remove tangles. Brushing the fur on the legs where the legs meet the body is important.
Seasonal changes and hormonal fluctuations in unaltered Ragdolls can affect the length of the coat. Spayed or neutered Ragdolls usually have a lush coat all year long as they lack the hormonal changes.
The tail should be checked daily for feces stuck on fur and cleaned using a baby wipe. They should be bathed once a week. If the coat feels greasy, it should be bathed. Their teeth should be cleaned every week to prevent periodontal disease.
Their nails should be trimmed every couple of weeks. Ragdoll’s eyes should be cleaned with wipes or a damp cloth to remove any discharge.
Similarly, owners should check their ears weekly and clean them using a cotton ball or soft damp cloth. Cotton swabs should be avoided here.
The Ragdoll litter box should be kept clean. They need a litter box that is big to ensure that there is room to turn around and squat.
Ragdolls go through several growth spurts until they are four years old.
Owners should also keep Ragdoll cats indoors to protect them from dogs or coyotes attacks, diseases from other cats, and accidents.