Sorghum is also known as guinea corn and it is a staple food in the drier parts of tropical Africa. It is able to adapt to dry regions with more unreliable rainfall because of its drought resistance.

Its cultivation is being threatened by competition from maize cultivation and the problem of the parasitic weed, Striga spp. 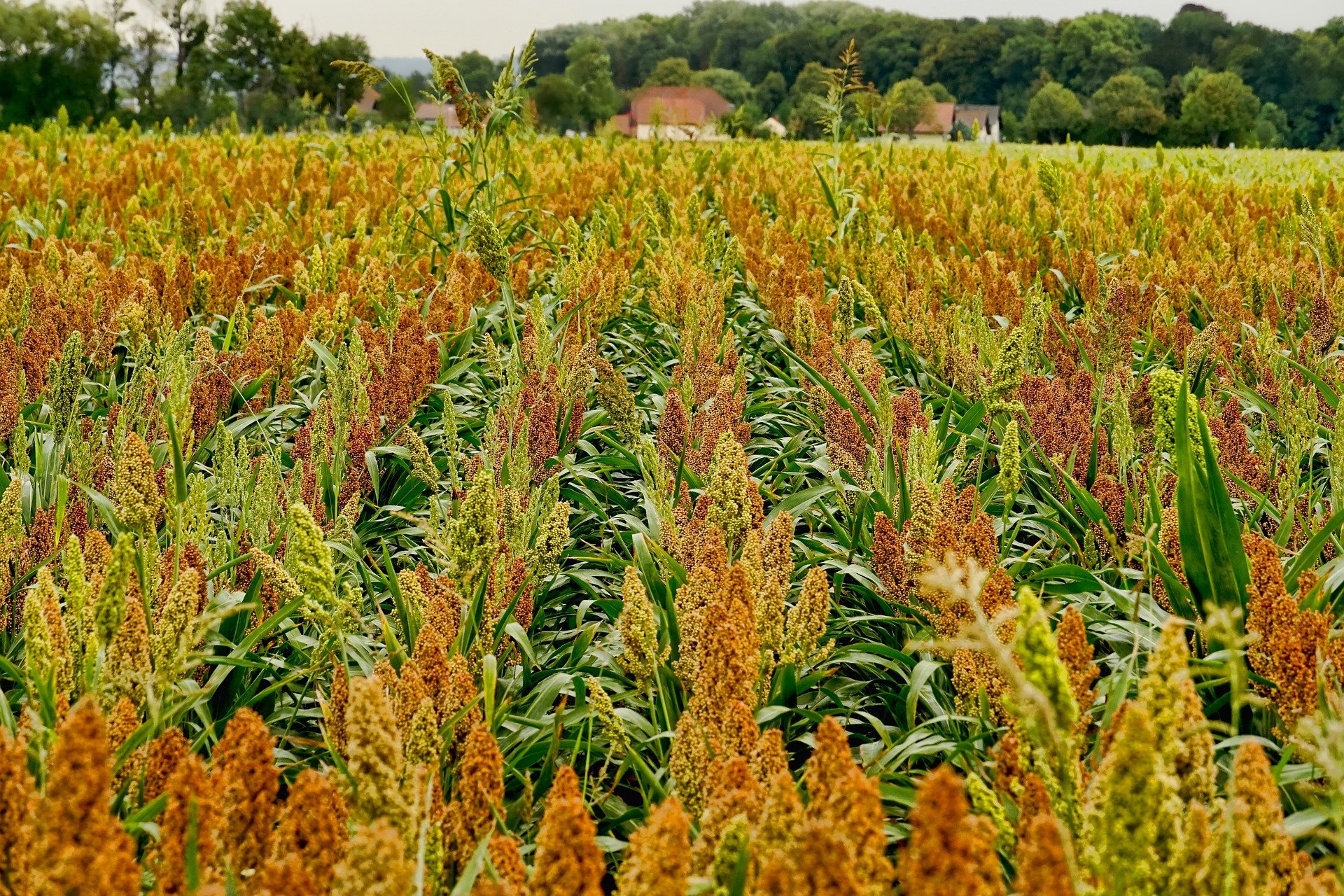 It is a native of East Africa and was domesticated in Ethiopia over 5,000 years ago. It was taken from Ethiopia to West Africa across Sudan to the upper Niger River.

Sorghum is adapted to a wide range of ecological conditions and will produce useful yields of grain under conditions which are unfavorable for most other cereals.

It is essentially a plant of hot and warm countries and can tolerate dry conditions.

The optimum temperature for growth is about 30°C. The plant seems to withstand extreme heat better than other crops.

Its great merit is its drought resistance due to many morphological and physiological properties, including its many secondary roots, small leaf area and waxy coating on the leaves.

The plants remain practically dormant during periods of drought and resume growth when conditions become favorable.

This property enables the crop to produce grains under conditions of limited or uncertain rainfall.

It tolerates salinity better than maize. It can produce good yield in soils too poor for many other crops.

It is a short day plant but cultivars vary in their sensitivity to photoperiod and this character is controlled genetically.

The Botany of Sorghum

It is a vigorous growing grass and can grow as tall as 6.0m. It is an annual with a single stem but tillers may be produced in some cultivars from axillary buds.

The roots are adventitious and raise from the lowest nodes of the stem. Prop roots are produced near the base of the plant.

The stem is solid and usually erect. The number of leaves varies from 7-24, lanceolate in shape with prominent midribs and often with a waxy bloom. The leaves are sessile.

The inflorescence may be a loose or densely packed panicle, with many primary and secondary branches borne on a hairy axis or central rachis.

The branches bear racemes of spikelets which are in pairs except at the tip where a group of three spikelets occur.

One member of each pair of spikelets is a broad sessile structure which is perfect and produces the grain, whilst the other member of the pair is a pedicelled, long, narrow spikelet which contains only male flowers.

At the apex of the rachis, the group of three comprises one sessile spikelet and two pedicelled spikelet.

The inflorescence starts to flower by the opening of those spikelets near the apex. Thereafter flowering continues downwards, the lower flowers of the inflorescence being the last to mature.

The sessile spikelet opens before the pedicelled one in any pair of spikelets.

Self pollination is common but some degree of cross-pollinated can occur.

The fruit is a caryopsis and varies in size, shape and color with cultivar. The grains are roundish, ovoid to flat.

The fused pericarp and testa varies in color from white, pale yellow, red, brown to deep purple. The white or yellow grains are generally preferred for food.

The young plants and leaves of sorghum contain a glucoside called dhurrin, which upon breaking down releases a poisonous substance known as prussic acid or hydrocyanic acid (HCN).

This is poisonous to livestock. The quantity of HCN varies with cultivars and growth conditions; it usually diminishes with age.

The poison is destroyed when sorghum fodder is made into hay or silage.

Propagation by cutting due to the presence of root primordial at the nodes.

Since it is largely grown in the Savanna and Sudan zones, it should be planted as soon as the rains are well established.

Fertilizer recommendation for sorghum is about 300-400 kg/ha of NPK applied at 2-3 weeks after planting.

Thinning and weeding is done manually. The parasitic weed, Striga sp., is the most serious weed and should be removed before it sets seed.

The build up of Striga population is aggravated by too frequent cultivation of sorghum on the same land.

Herbicides may be applied to control weeds; eg. atrazine at 2.0kg/ha or gardoprim A (atrazine+ terbuthylazine) at 1.5-2.0kg a.i/ha applied pre-emergence.

The time to maturity varies greatly among cultivars. Some early types take only 100 days or less, while late types take 5-7 months.

Harvesting may be by cutting down the whole plant after which the heads are removed, or the heads may be cut from the standing plants.

Dwarf cultivars with few tillers and even maturity are suitable for mechanical harvesting.

Sorghum is often stored in the head. Grain, whether in the head or threshold, is susceptible to attack by insects. Hence they should be fairly dry before harvest (15-18% moisture content). The heads are sometimes hung in the smoke above open wood fires in houses. Grains can be stored in bulk in silos after drying properly to moisture content of 10-11%. Fumigation is desirable.

By adopting recommended practices, yields of up 2,500 kg/ha are possible. The yield potential is estimated at 4,000-5000 kg/ha.

Several rots damage the roots and stem of sorghum and sowing resistant cultivars is the only effective way to avoid losses.

Many of the leaf diseases may be controlled by crop sanitation and rotation.

The principal diseases attacking sorghum panicle are the smuts, caused by Sphacelotheca sp and it can be controlled by dressing with fungicides such as Aldrex T and Fernasan D.

Major pests affecting sorghum are the following but not limited to these.

Shoot flies lay their eggs on the leaves of young plants. The larvae penetrate into the culm and generally destroy the growing point.

Control is by planting early and the application of systemic insecticides such as Furadan (carbofuran) to the soil.

Sorghum midge attack sorghum heads. The larvae feed on the ovary and cause it to shrivel up without forming grain.

Control is by early planting and use of resistant varieties.

Stem borers bore holes in the stalks and may prevent head formation.

Sanitary measures such as the destruction of infested stalks are effective.

One of the most serious pests of sorghum is the small red-billed weaver bird, belonging to the species Quelea quelea.

They invade the crop in large numbers like locusts and cause heavy damage.