Benefits of Minerals to Pigs and their Deficiency symptoms

The growth and efficiency which should accrue from expensive inputs of protein and energy can be negated by small imbalances in or shortages of essential minerals.

Defining the pig’s requirement for minerals is complicated by the interaction that occurs between some minerals and the fact that, not all the minerals in foodstuff are available to the pigs because they cannot be digested. 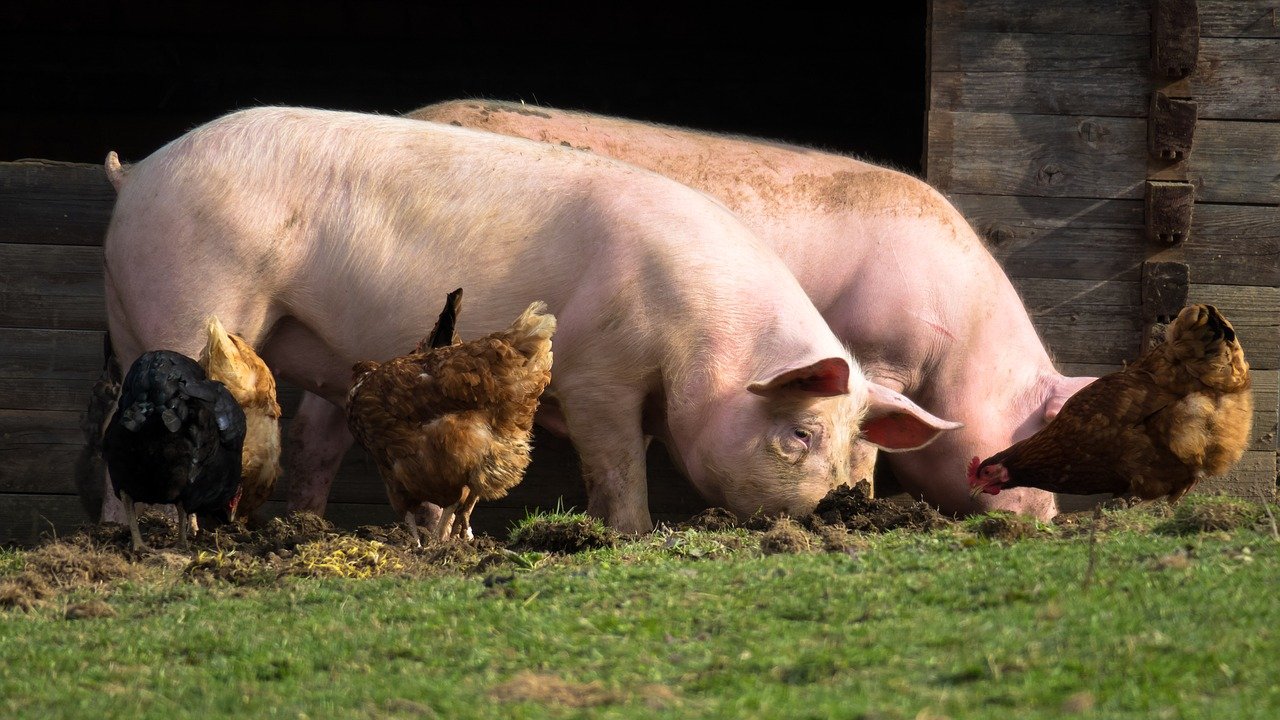 Deficiency of either calcium or phosphorus results in inadequate bone calcification, and bones becoming brittle and easily fractured.

This leads to rickets (in younger pigs) or osteomalacia (in mature pigs).

If calcium or phosphorus are deficient in the diet of a lactating sow, the sow will draw on supplies from her skeleton.

This causes lameness, rear-leg paralysis, and the ‘Downer Sow Syndrome’ when the sow becomes irreversibly crippled and unable to rise.

A deficiency will lead to poor growth, bowed legs, and a stiff-legged gait known as the ‘stepping syndrome’.

Generally, however, there is adequate magnesium in the diet, especially in maize-soybean meal diets.

These are treated together as it is common practice to add them to pig diets in the form of common salt (NaCl).

Correct levels of salt are of prime importance in hot climates.

If water is short, toxicity can also be a problem as this will occur at levels of 2 percent of salt in the dietary dry matter.

Toxicity is characterized by weakness, nervousness, convulsions, staggering, and death.

In certain areas, particularly dry ones, water quality may be affected by too-high concentrations of salt.

This increases the chances of toxicity and lowers water intake. In these areas, water may need to be treated before being offered to pigs.

Copper deficiency results in nutritional anemia and leg weakness and this is probably associated with the copper/iron interaction.

As copper toxicity occurs only at levels of 500mg per kgDM in the diet, which is approximately 125 times estimate requirements.

Copper is frequently included well above minimum requirements in grower diets as a growth promoter.

However, care must be taken with young pigs, as an inclusion rate of 300mg/kg of diet can be toxic especially zinc and iron levels are low.

Lack of iron results in anemia pigs, with poor growth and a rough hair coat.

It is a particular problem in piglets because they are born with low iron reserves and there is very little supplied in the sow’s milk.

As a consequence, piglets reared intensively without access to soil require a supplementary source of iron, either given orally or by injection.

A deficiency of zinc gives rise to the condition known as parakeratosis.

This causes red raised areas on the skin which becomes crusty, and may eventually coalesce over the whole body.

Other symptoms are poor growth and reduced appetite.

The deficiency of manganese will lead to lameness in growing pigs and the birth of weak piglets from deficient sows.

However, the deficiency is not common in normal pig diets.

The main symptoms of an iodine deficiency are goiter and an enlarged thyroid. Sows will farrow weak, hairless pigs.

Because of their interaction, selenium must be considered together with vitamin E.

A lack of one will affect the utilization of the other.

The main symptom is sudden death due to cardiac failure.

Postmortem examinations will show lesions of the cardiac muscles.

Hepatosis also occurs between three weeks and four months of age and characterized by generalized edema and death, with the ears turning blue.

With muscular dystrophy, pigs develop staggering gait and are unable to rise.

It usually affects fast-growing pigs from 30 to 60kg live-weight.

Vitamin E is broken down by oxidation if stored at high temperatures.

It, therefore, tends to be unstable to the rations, and deficiency is likely to occur.

This is particularly the case when selenium levels in the diet are low, as in the case when maize-soybean meal combinations are used as food, or when the levels of unsaturated fats in the diets are relatively high.

Availability can firstly be affected by the source of the mineral.

For example, if phosphorous is supplied to the pigs, phytate phosphorus remains bound to the calcium component, and its availability can be affected by the metabolic state of the animal.

It has been shown that calcium and phosphorus availability will decrease with age and size of pig from 85 and 80 percent at 5kg bodyweight to 45 to 65 percent respectively at 90kg bodyweight.

Interactions can play a major role in mineral utilization.

Even in feed ingredients, where one ingredient can depress or enhance the utilization of the other.

Some important interactions are: