Chilies (Capsicum spp. Family: Solanaceae), also called peppers are widely grown across the globe, from America to Asia and even in Africa, with China being the leading country growing chilies.

There are a wide variety of peppers that vary in pungency, size, and color of the fruits.

It is commonly called green or sweet pepper and it´s most widely grown all over the world.

The Origin of Chillies

The plant probably originated from Mexico. It was introduced into Europe in the fifteenth century and is now widely distributed throughout most tropical and subtropical areas. 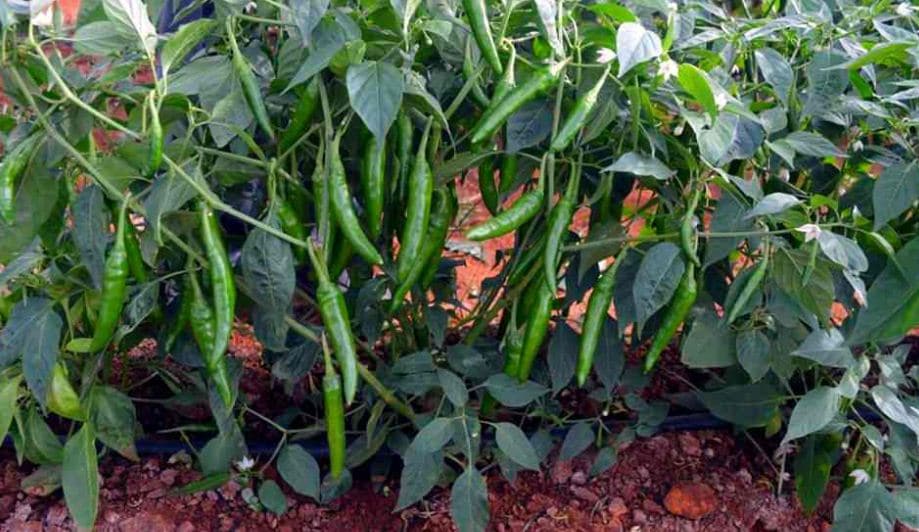 Fertile loam soils are preferable with a high level of organic material and reserves of essential elements.

Good drainage is important since water logging is likely to cause leaf shedding.

Plants are tolerant of slightly acid conditions but a pH of 5.5-5.6 is preferable.

Most cultivars are adapted to temperatures in the range of 21-25°C.

It is usually grown as a rainfed crop, with a rainfall of 600-1200mm but excessive rainfall affects flowering and fruit set and may also encourage fruit rot and decay.

Most cultivars are adapted to growing at altitudes up to 2000m.

Sweet pepper is an annual or short-lived perennial herb that grows up to 1.5m in height.

The roots have well-developed taproots, often with many lateral roots. The main shoot is branched, erect, or semi-prostrate, fleshy, often woody at the base that is either round or slightly angular.

The leaves are variable in size, simple, broadly lanceolate to ovate and tips pointed, and the leaves grow up to 12cm long and 7cm wide.

The flowers are carried singly and the plants bear large fruits which can be yellow, orange, red, brown, or purple when ripe.

These fruits vary in shape, pungency, and sweetness. The fruit is a many-seeded indehiscent berry and is flat and kidney-shaped and usually yellow.

Bees and ants visit the flowers and both self and cross-pollination occur, with the latter being about 16%.

All cultivars are grown from seed with an approximate seed rate of 1-2kg/ha.

The seeds retain their viability for 2-3 years and germinate in 6-10 days after planting.

Seeds are normally down in containers or seedbeds in a nursery and transplanted when 8-10cm tall with 4-6 leaves (3-4 weeks old).

Direct sowing is possible in some conditions, followed by thinning.

Weeds can be controlled manually or with GALEX at 3kg a., I/ha applied pre-emergence.

Apply NPK fertilizer at the rate of 200kg/ha. Plants should be irrigated regularly during dry periods.

Flowering occurs 1-2 months after planting and a month later, the first fruits are ready for picking.

As the plant is indeterminate, picking may continue for up to 3 months or more and the fruits can be progressively harvested at intervals of 1-2 weeks.

Peppers lose 65-70% of their fresh weight on drying, making farmers’ yields characteristically range between 450 and 1000kg/ha of fresh weight (340-560kg/ha of dry weight).

With improved practices, Capsicum annuum can yield up to 10-15 tons/ha of fresh weight and Capsicum frutescens can yield about 3-4 tons/ha of dry pepper.

Fruits may be harvested green and eaten fresh or sun-dried when ripe.

Fresh fruits can be stored for up to 14 days at a temperature range of 7-10°C and relative humidity of 95% but they are sensitive to chilling injury.

Ripe fruits can be sun-dried for 3-15 days before storage and can be stored for a long time if dried to a moisture content of just 10-12%.

Dried chilies contain about 10% moisture and Chillies are generally a rich source of vitamin C.

It is used in soups and stew and also eaten raw in salads.

The pungent principle of chilies is capsaicin which is concentrated mainly in the placental region where the seeds are attached to the spongy central portion. Chilies are rich in vitamin C.

Diseases and Pests of Chillies

The most serious pests are thrips (Scirtothrips dorsalis) and fruit fly (Ceratis capitata).

It is cultivated mainly in the tropics and is commonly called ted hotor bird pepper. The Centre of origin is South America.

The environmental response is similar to that of Capsicum annuum except that Capsicum frutescens is generally more tolerant of extremes of temperatures and rainfall than Capsicum annuum.

It is a perennial shrub, living for 2-3 years. The plant is similar in structure to Capsicum annuum but the fruits are small, narrow berries that are orange, yellow, or red when ripe.

The fruits are many-seeded and usually highly pungent. The two species do not cross readily and the F1 hybrids are sterile.

Cultural requirements are similar to those of Capsicum annuum except that as Capsicum frutescens is a short-lived perennial rather than an annual. It will tolerate slightly less fertile soil conditions.

The first fruits are produced at 80-100 days after transplanting. Harvested fruits are sun-dried and can easily be stored. They can be ground and stored in powdered form.

Hot pepper is used in sauces, soups, and stews and generally as a flavoring.

The powdered forms are used in curries and as well used traditionally as medicine or stimulant.

Capsaicin, the pungent constituent of capsicum pods is used in the manufacture of ginger ale and ginger beer.

The Distinguishing features between Capsicum annuum and Capsicum frutescens.