Sisal (Agave sisalana Perrine) is a monocotyledonous crop from which leaf fibers are extracted without retting.

The leaves provide the most important of the world’s hard fibers, I.e. fibers so coarse that they can only be made into twine and rope.

It is a naturally occurring pentaploid hybrid. Sisal is produced in Africa in Tanzania, Kenya, Angola, and Madagascar. 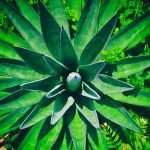 Sisal originated in central America and Mexico where it occurs as a wild plant, as well as in cultivation.

The Ecology of the Plant

Sisal requires warm weather and full sunlight. It is grown in areas with an annual rainfall of 600-1250mm.

Excessive rainfall is harmful and the plants can not tolerate waterlogging. Sisal is grown from sea level up to 1800m.

It can be planted in a wide range of soils, provided they are well-drained and fertile.

Heavy clay soils are not suitable, but it can be grown on clayey soils provided that deep drains are made to drain out the excess water from the field.

The Botany of Sisal

It is a perennial with a short thick stem or bole and a close rosette of leaves.

The root system is adventitious, each bearer root arising from a leaf scar at the base of the bole.

A set of roots, known as feeder roots, arises from the bearer roots.

The stem or bole is a hard, thick, woody structure.

The rosette of leaves is sessile, linear-lanceolate, attaining a length of 1.22m or more and are up to 15cm wide.

They are thick, fleshy, and often covered with a waxy bloom.

The tip tapers into a sharp purplish black spine.

The leaf bases are quite thick, bulbous, and triangular in cross-section.

A sisal plant, on average, produces about 300 leaves during its lifetime; after which it sends up a flowering axis or pole nearly 9m tall, branching in the top 1.5m and bearing a dense cluster of follower stalk.

Each bulbil is a plantlet consisting of a meristem, 6-8 reduced leaves, and rudimentary adventitious roots. A pole may produce as many as 3000 bulbils.

Suckets grow from rhizomes, which are produced from the buds in the axils of leaves below ground level.

Sucker production begins about a year after planting and one plant can produce as many as 20 suckers during its life span.

Suckers were formerly frequently used as planting materials but the modern practice is to use bulbils for propagation.

The bulbils are first raised in nurseries for about 12-18 months before they are planted out in the field.

Before transplanting, all the transplants are graded according to size in order to obtain a uniform stand of plants.

Transplanting usually dines at the beginning of the rains.

Planting is done at a spacing of 2.5×0.8m or by planting in double rows 4m apart, withn1m between the double rows and 0.8m within the row.

It is important to weed during the first 2-3 years by hand hoeing, mechanically, or with herbicides.

Atrazine can be applied as a banded spray after planting; dalapon, diuron, and fluometuron have been found effective.

Generally, no commercial fertilizer is applied; only sisal waste is applied in large quantities.

If a nutrient deficiency is pronounced, N and K fertilizers can be applied.

The first harvest is usually made 2-3 years after planting when about 100 leaves are produced.

Harvesting of the leaves is done by hand with small knives with straight blades.

Harvesting usually dines once a year but in some cases, twice a year.

Only the leaves of economic value, which are mostly on the perimeter of the bole are cut, leaving those which are still near the meristem.

After harvest, the terminal spines are cut off and the leaves are tied into bundles for transport to the factory.

This has to be done quickly because the leaves must be decorticated within 24 hours of cutting.

In large estates, modern high-speed automatic decorticators are used to separate the fibers.

The fibrous strands are dried by placing them on racks in the sun or by centrifuging the supersaturated fibers, followed by artificial dehydration in driers.

Drying should be done as quickly as possible in order to preserve the natural white color of the fibers.

The dried fiber should not contain more than 15% moisture.

After drying the stiff fibers are beaten lightly by metal beaters, a process known as ‘brushing’ to free the individual bundles and to remove dirt and other extraneous matter.

The process also combs out the shorter fibers. The long or fine fibers are then sorted, graded, and packed. The packed fibers contain 10-12% moisture.

The average yield is about 900kg dried fibers/ha annum. Yields of up to 2,500kg of dried fiber/ha/per annum can be obtained.

Sisal is the world’s foremost cordage fiber. The fibers are used mainly in the manufacture of twines and cordage (ropes for ships).

It is also used as padding in motor cars and upholstered furniture.

Sisal leaves contain echogenic, used in the partial synthesis of the drug cortisone.

Bole rot caused by Aspergillus Niger is the most serious disease of sisal. It causes a wet bole rot and may result in the collapse and death of the plant.

Mexican sisal weevils (Schyphophorus interstitials) are the only major insect pests of sisal in Africa.

They feed on the youngest leaves, before and just after unfurling.

Planting before or early in the rainy season and the application of insecticides in the soil around the young plants give some control.