Groundnut is also called peanut and can be grown as a grain legume as well as an oilseed crop.

It has the highest oil content (44-50% oil) among tropical grain legumes.

It is a major cash crop, which is widely grown in all tropical and subtropical regions of the world.

In Africa, where 20% is produced, the main producers are Senegal, Nigeria, Zaire, and Sudan.

Groundnut originated in South America, probably Brazil to West Africa and the Spaniards took it across the Pacific to the Philippines from where it spread to China and other Asian countries.

It is now found in all tropical and subtropical countries. 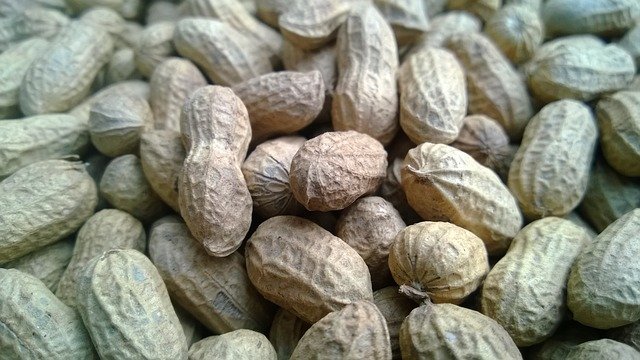 Groundnut is a warm-season crop and is usually grown at 40°N and 40°S of the equator. It grows best in sandy loam soils.

Clayey soils should be avoided as fruit formation is hindered and harvesting is difficult.

Soils that are very acidic (less than pH 5) are also not suitable. It can also not tolerate waterlogging.

The crop is relatively drought tolerant and is commonly grown in regions of moderate rainfall in the range of 80-130cm per annum.

In West Africa, this corresponds to the savanna regions. The rainless period that follows the growing season in these regions allows for adequate drying of the crop and for its storage outdoors.

Botany of the Plant

The plant is a low growing annual with a central upright stem. The numerous branches vary from prostrate to nearly erect.

It has a well-developed tap root system with numerous laterals, which tend to increase with depth.

Root nodules are produced in abundance on both the main and lateral roots.

The stem of the plant is round in cross-section, covered with short hairs and becomes hollow with age.

It is composed of short internodes and bear alternate, pinnate compound leaves.

The leaves are carried on long petioles. The leaflets are four in number, two above and two below, each obovate in shape.

The flowers, which are bright yellow, are carried in leaf axils, either singly or in groups of three or more.

The peduncle is fairly short, stout and hairy. Most of the flowers are produced near the base of the stem.

The five sepals of each flower are united into a tube, about 2cm in length with an irregular number of short lobes.

The yellow petals are inserted in thenrim of the calyx tube. Most of the flowers are produced around the base of the stem.

Self-pollination is the rule and after pollination, the section immediately behind the ovary (the peg) elongates and pushes the ovary into the soil where the pod develops.

The peg or carpophore or gynophore is positively geotropic – the fruit of the groundnut only begins to grow when the tip of the carpophore has reached its final depth in the soil (5-10cm); it then grows horizontally.

When the fruit-bearer does not succeed in entering the soil, the fruit does not develop.

The fruit is an indehiscent pod containing one to six seeds. The seed is a straight embryo and contains no endosperm.

It is covered with a thin papery seed coat. The outer layer varies in color from brown, light tan, purple to brick red.

The varieties can be classified according to growth habit and maturity dates.

There are two main types with regards to growth habit:

Based on maturity dates, there are

Cultural practices of the Plant

Groundnut is seeded at the rate of 35-45 kg/ha of the kernel, depending on the seed size and spacing.

Germination is faster for shelled materials than the unshelled (6-10 days).

This advantage is not necessarily translated into higher yield. Seed dressing may be necessary with Fernasan D, which is an insecticide as well as a fungicide.

Planting should be done as soon as rains are reliable; March to April in the south and June in the North.

Weeds can be controlled by weeding 2-3. Herbicides can be used for weed control, e.g gales as for cowpea or alachlor or metolachlor applied pre-emergence at the rate of 1.5kg a.I/ha.

Groundnut may need phosphorus and potassium fertilizers and should be applied broadcast and incorporated or side dressed at or shortly after planting.

Fertilizer application should be at 18-36kg P2O5/ha as single superphosphate or triple superphosphate and 30kg K2O as potassium is not necessary since the plants are able to fix atmospheric nitrogen.

Delay in harvesting results in losses of yield due to shedding or sprouting. So harvest when the aerial parts turn brown.

Harvesting is done by hand pulling, and the harvested pods are then turned over to sundry before stripping. Drying in tripods gives greater viability of seeds.

Losses are very heavy if the soils get hard at the time of harvest. When the pods are dry, the shells are removed (decortication) either by hand or by machine.

The yield potential in the northern Guinea and Sudan zones of Nigeria is 3000-4500kg/ha.

Shelling is done in some places by pounding the nuts in a mortar but this results in many splits or broken seeds. Shelling by hand gives good quality seeds, especially for planting, but this is usually laborious.

Small machines are available for shelling and they give a high return of unbroken nuts.

How to Preserve Groundnut

It is better to store nuts in the shell to preserve quality and viability. In this form, they can be stored in sacks in the form of pyramids.

If preserved in stores, the control of storage pests is necessary. The stores and surroundings should be kept clean. Bags should be cleaned and heat-treated to destroy insects and larvae in them.

Instead, grain and stores should be fumigated using methyl bromide and carbon disulfide.

In small stores, the use of 0.5% lindane dust scattered on the grains at 10 parts-bin one million is sufficient.

The seeds are rich in non-drying oil and protein, the content of which varies with cultivars.

The uses can be grouped into three- human consumption, industrial use, and livestock feed.

1. Human consumption: It can be consumed by cooking the pods or roasting the seeds. It is also used for soup making.

2. Industrial Use: It has high oil content, which is extracted for vegetable oil(groundnut oil). It is used as cooking oil and the manufacture of margarine.

3. Livestock feed: The cake after extraction of oil (groundnut cake) is rich in protein and used as a component of livestock feed. Other minor uses include the use of the green haulms as fodder and hay.

1. Rosette: The most serious disease of groundnut in Africa is a rosette. It is a virus disease, which is spread by aphids. It attacks the plant at the flowering stage, resulting in stunted growth, mottling of the leaves and finally death of the plants.

2. Leaf spot: Leaf spot is caused by Cercospora spp. It is characterized by dark spots surrounded by a yellow ring and is common in the lower leaves.

It can cause defoliation of the plants especially close to maturity. Fungal sprays may be used to control the disease.

3. Wilt: This is caused by the fungus Sclerotium rolfsii. It attacks isolated plants, causing them to wilt and die. It is controlled by uprooting and burning infected plants.

4. Aspergillus: This is a disease mainly of stored seeds but also affects living plants. Aspergillus flavus attacks seeds giving rise to aflatoxin, which is toxic.

Leaf eating beetles and caterpillars, aphids and thrips are the main pests. They may be controlled with sprays.