The chow chow breed has its origin from China and has been around for a long time now.

It is one of the popular dog breeds with spots on their tongue. 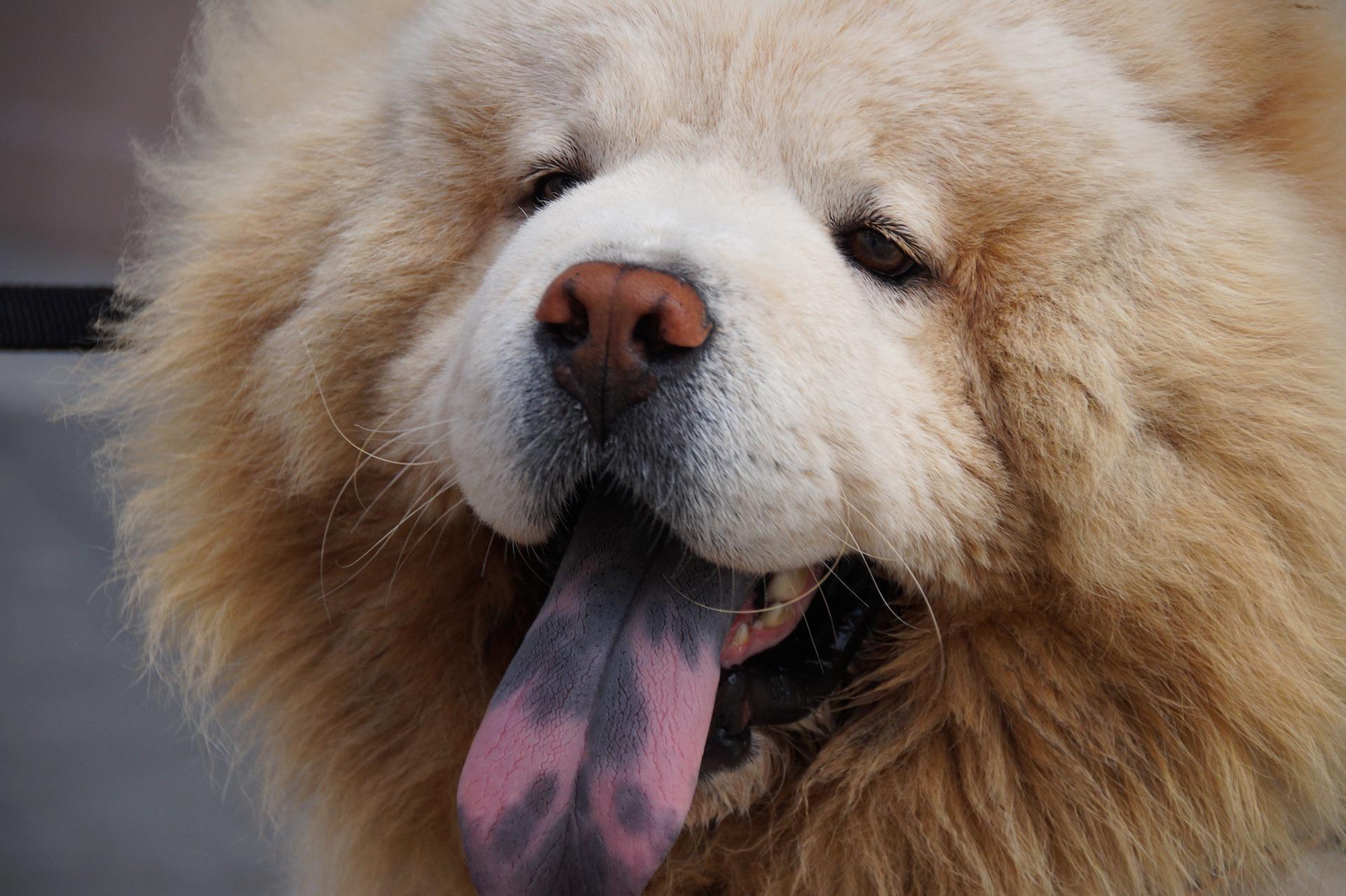 The chow chow breed is a dog with black, blue or blue-black tongue and also purplish tongue and lips.

This breed is now diverse due to modern breeding techniques. Therefore, the appearance and personality of the dog have changed over time.

This breed was initially considered as a guard dog and used for hunting but now they belong to the pet dog category too.

The Chow Chow breed has color varieties such as red, blue, black, cream and cinnamon.

They are usually short in height and relatively small in size.

An average chow chow dog has height rage between 45cm and 58cm, with the male growing a little taller than the female.

Also in weight, the male can weigh up to 35kg while the female chow chow weighs an average weight of about 25kg.

Since they have the characteristics of a watchdog they are a bit aggressive in nature and usually respond to one or two owners only.

They are known to lose their temper here and there but they can be loving and caring towards their family too if they’re given much attention right from when they are pup.

This breed is highly protective of its owner. Due to this fact, only experienced people should have the Chow Chow breed.

Chow chow doggie should be trained properly. It should be given socialization training in the early stage.

Having a Chow Chow dog in the home means the owner will have to spend adequate time with the dog.

There are certain common health problems which occur in the Chow Chow breed.

Here, the breeder should take care of his dog pet while considering breeding.

It is ideal to take the necessary health test and DNA test before taking your dog for breeding.

If you’re buying chowchow dog from online stores like Craiglist, petfinder and others, you should enquire very well before making order.

Taking care of the Chow Chow dog breed might be time demanding and stressful and the breed is not good for the busy type.

One reason for this is the rich hair coat of the dog. Since the coat is very thick, it may be difficult to maintain the dog.

This dog breed should be brushed regularly due to the massive hair, If not, it will disturb the eyes and ears.

People who have a busy lifestyle should not opt for this breed.

Usually, the dog will have to be brushed at least four times a week. In fact, there are various types of brushes in the market to brush the different parts of the dog’s body.

If it is not maintained properly, then the dog will have mating issues.

Since these dogs shed very frequently, maintaining them will be a huge task.

Generally, the Chow Chow breed can be expected to live around 10 to 12 years.

Like any other Dogs, the chow chow breed is also prone to a variety of diseases.

This dog breed usually has joint issues. Elbow dysplasia and hip dysplasia is a common problem in this breed.

Due to this issue, the dog may be lazy at times. Joint pain will be witnessed in the knees also.

This may lead to a ligament tear in the Hind Legs.

Apart from this, they may have a problem like a cataract, glaucoma and eyelid issues.

This is due to the fact that this dog breed has loose eyelids.

Also, since the dog has a thick fur coat, they are prone to a number of skin diseases as well.

Issues like bacterial infections and allergies are often witnessed in this dog. They are also known to have less immunity in them.

The Chow Chow breed might also witness bloating due to thyroid diseases and gastrointestinal problems.

Since they have a thick coat, it might lead to issues during climatic changes.

These dogs can not tolerate the summer season as much like other dog breeds with less hair.

Along with their thick fur coat, they also have respiratory issues. This might shoot up during the hot season.

Due to this, most vets do not recommend heavy exercise for Chow Chow during the summer season.

They are in fact prone to heat stroke from time to time.

While the chow chow dog is not much popular here in US, you can buy this breed from any reputable online store and get it shipped to your location.

Upon our review, there are sellers listing this breed for sale in Alberta, Bristol, California, Brisbane, and Florida.

You can get a mini chow chow or Pomerania mix from Petfinder, American kennel club, Puppyfind, ASPCA, and other pet stores.

Like i said earlier, buying a chow chow puppy is the best so you can get him trained properly and provide the necessary medical care.

Recently, the search trend for pet lovers looking to buy chow chow dog from San Diego, Houston, Colorado, Indiana, Illinois, iowa has taken an uptrend and this is a good target for chow chow breeders in the US.

If you’re buying the chow chow dog from Gujarat, guwahati, Kolkata, Kerala, Delhi, Hyderabad and other places in India, you can either buy from local breeders or from store like Pets world, Stuff shoppe, Giri in Asia.

Craiglist and Gumtree are also food classified ads you can search for this breed and its pedigree.