Agriculture is a broad field of science and there are terminologies used in the field of agriculture.

Some are pertinent to farming while others to other sub-fields of agric science.

Some of the words associated with farming and agriculture generally are discussed in this article.

These agriculture vocabularies are listed from A to Z and are both basic and modern terms with clear definitions.

You can always check back for updates as we’ll keep adding to the words. 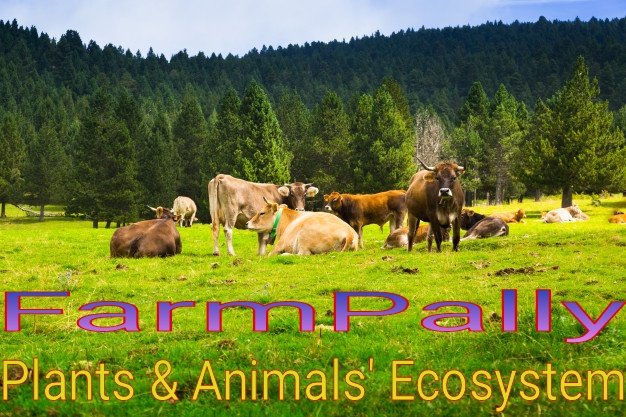 Aflatoxin:  Poison produced by the attack of Aspergillus flavus in groundnut seeds.

Allicin:  A pungent substance released when garlic is cut or crushed; the substance alanine is converted to allicin under the influence of the enzyme alliinase.

Annual:  A plant that completes its life cycle in one year.

Anthesis: The time the flower is expanded, or the process of dehiscence of the anthers.

Apical dominance: The condition whereby by shoot apex regulates the growth and development of the lateral buds and branches. Auxin, a growth hormone, has been indicated to be involved in the process.

Arable crop:  A crop that can be grown for one season.

Awn:  A fine bristle terminating an organ, as found in the flowers of grasses.

Bast fibers: Fibres found associated with the phloem, pericycle, and cortex of the stem of certain plants; they arise either from the cambium or from the apical meristem

Biennial: A plant that requires two leaf years to complete its life cycle, flowers, and fruits and dies in its second year IR season.

Bolls: The subspherical or avoid fruits of cotton.

Bulbil: An aerial bulb or bud produced in a leaf axils or replaces the flower, which on separation, is capable of propagating the plant.

Capsule: A dry dehiscent fruit composed of two or more carpels and either splitting when ripe into valves or opening by slits or pores.

Carpophore: A pointed stalk-like structure that elongates through an intercalary meristem at the base of the sessile ovary of groundnut and pushes the ovary into the soil. It is positively geotropic.

Caryopsis: One seeded indehiscent grain of a grass crop in which the pericarp and testa are fused.

Cereal: A grass cultivated for its edible grains.

Coleoptile: The sheath covering the first leaf or plumule of a grass seedling as it emerges from the soil.

Coleorhiza: A sheath covering the tip of the first root or radicle from the seed.

Compound fertilizer: Fertilizer made up of two or more elements eg NPK.

Axils of scale: Like remains of leaves of the previous season’s growth.

Cormel: A corm arising vegetatively from a parent corm.

Cribs: Storage structures made from wooden slats or wire mesh for grain storage.

Culm: The stem of grasses.

Cultivar: An agricultural variety, which has originated and persisted under cultivation, as distinct from a botanical variety.

Curing: To prepare crops for preservation by drying or other processes.

Decortication: Removal of the shell of groundnut by hand or machine.

Determinate: When the terminal or central flower of an inflorescence opens first and the prolongation of the axis is arrested.

Dhurin: A glucoside in young plants and leaves of sorghum, which upon breaking down releases prussic acid.

Dicotyledon: With unisexual flowers and with the staminate and pistillate flowers on different plants.

Diploid: With two sets (genomes) of chromosomes, as occurs in somatic or body cells; usually written 2n, having twice the basic chromosome numbers of the haploid germ cells.

Dioscorides : Poisonous alkaloid found in some wild species of Dioscorea.

Ear: The female inflorescence of the maize plant.

Eye: A bud on a tuber

Fadamas: Flooded plains suitable for the growth of swamp rice.

Fermentation: The incomplete breakdown of glucose, in the absence of oxygen, to ethyl alcohol and carbon dioxide especially by bacteria and yeast cells.

Flag leaf: Leaf subtending the inflorescence in some cereal crops.

Fuzz: Outgrowth or hair from the epidermis of cottonseed in which the hairs are circular in cross-section, at first thin-walled but cellulose is then deposited until the lumen is almost obliterated.

Gari (Garri): Grated, fermented, sieved, and fried cassava mash. In its final form, it is a free-flowing granular meal used in a variety of ways.

Gining: Process of separating the lint from the seed and fuzz in cotton in a machine called a gin.

Glumes: The lower two sterile bracts as the base of grass spikelets.

Granaries: Storage structures made locally with mud and thatch.

Husk: The coarse outer covering of some fruits, eg. Maize.

Hydrocyanic acid (HCN): A very toxic compound found in many plants, including cassava.

In cassava, HCN is concentrated mainly in the peel of the tuber and the leaves.

Indehiscent : Not opening when ripe.

Indeterminate: An inflorescence in which the terminal followers are the last to open, so that the floral axis may be prolonged indefinitely.

Inflorescence: The arrangement and mode of development of the flowers on the floral axis.

Lemma: The outer (lower) bract enclosing each floret in a grass spikelet.

Ligule: The thin membranous protection from the top of the leaf-sheath of grasses; the outgrowth separates the leaf sheath and leaf blade.

Lint: Outgrowth from the epidermis of cottonseed in which the hairs grow to a greater length and the deposition of cellulose is reduced, giving a lumen or cavity so that the hairs collapse on drying to form a ribbon.

Lobed: Divided, but not into separate leaflets.

Locule: Compartment or cell of an ovary, fruit, or anther.

Lodicules: The scales, usually two in number, at the base of the ovary in grasses, believed to be the rudimentary perianth, which swells to cause the opening of the floret.

Lycopene (Lycopersicon) : A pigment that together with carotene impacts the red coloration of the fruit of tomatoes.

Monocotyledon: Angiosperm having a single cotyledon or seed leaf.

Monoecious: When male and female flowers are separate, but borne on the same plant eg. in maize.

Nodules: A tubercle formed on legume roots by symbiotic nitrogen-fixing bacteria of the genus Rhizobium.

Nursery: Environment where plants are raised for a certain period before transplanting to the field.

Palea: The inner (upper) of the two bracts enclosing each floret in a grass spikelet. It is usually thin and papery.

Panicle: An inflorescence with a main axis and subdivided beaches.

Parboiling: Pre-milling treatment of rice in which the unhusked rice is soaked in water and steamed under pressure until the outer layers of the starchy endosperm are partly sterilized.

Pedicel: Stalk each individual flower of an inflorescence.

Photoperiodism: The response of plants to different day lengths or light periods.

Plumule: The primary bud of an embryo IR germinating seed.

Prop roots: Roots that arise from nodes above ground in some cereals and help to support the plant. They may be thick, partially photosynthetic, and often deeply pigmented.

Protandrous: Stamens shedding pollen before the stigma is receptive.

Protogynous: When the stigma is receptive before the pollen is shed.

Rachilla: Secondary axis of the stalk of a grass spikelet.

Rachis: The principal axis of an inflorescence.

Radicle: The first root of an embryo or germinating seed.

Rosette: A cluster of spreading or radiating basal leaves formed naturally or induced by disease as in groundnut.

Scape: A leaf-less flower stalk arising from the ground.

Scutellum: A shield-shaped organ surrounding the embryo of grass seed, morphologically a cotyledon.

Silos: Unventilated structure for bulk storage of dry grains; made of concrete or metal.

Simple fertilizer: Fertilizer is made up of one element.

Spadix: A flower spike with a fleshy or thickened axis.

Spathe: A large bract enclosing a spadix, or two or more bracts enclosing a flower cluster.

Spike: A simple indeterminate inflorescence with sessile flowers along a single axis.

Spikelet: The unit of inflorescence in grasses, consisting of two glumes and one or more florets.

Solanin: Poisonous glucoside in green grown for its stimulating effects due to the presence of some alkaloids.

Stolon: A trailing stem usually above the ground which is capable of producing roots and shoots at its nodes.

Sucker: A shoot produced from a crown or rhizome or axillary buds.

Tapioca: Made from cassava; it is a wet or partially dried sieved starch particle heated with continuous stirring.

Tendril: A thread-like climbing organ formed from the whole or part of a stem, leaf, or petiole.

Tiller: A shoot from the axils of the lower leaves, as in some grasses.

Tuber: The swollen portion of an underground stem or root, which acts as a stronger organ and propagule. An example is a cocoyam.

Unisexual: Of one sex, having stamens only or pistils only.

Variety: A group of individuals within a species that differ from the rest of the species. An agricultural or horticultural variety is referred to as a cultivar.

Weed: A plant growing in a location where it is not wanted.